Tags Related Author Las operadoras respaldan el papel de Qualcomm en la RAN abierta LIVE FROM QUALCOMM SNAPDRAGON TECH SUMMIT 2017, MAUI: Qualcomm detailed its next-generation flagship processor, Snapdragon 845, with a focus on “innovative architectures for artificial intelligence” (AI) and delivering a more immersive user experience.The categories comprised two of five the company broke-down its updates into, with the list rounded out by ‘secure’, ‘connect’ and ‘perform’.Snapdragon 845 is expected to be in devices early 2018 including “smartphones, XR headsets and always connected PCs”. The silicon is already being made available to vendor partners and Alex Katouzian, general manager of mobile for Qualcomm Technologies, said “at MWC you’ll probably see announcements”.While Qualcomm and its partners took the wraps off a number of always connected PCs here this week, these are powered by the current Snapdragon 835 chip and not the upcoming product.ImmerseTim Leland, VP of product management at Qualcomm (pictured, below), commented: “Immersion is seamlessly capturing and augmenting the world around you. Now with Snapdragon 845, we have accomplished that with some mobile technology advancements within the human senses of sight and sound, and more intuitive interactions.” 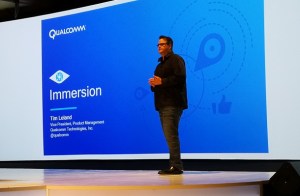 Snapdragon 845 introduces the Spectra 280 image signal processor and Adreno 630 visual processing subsystem, which are said to “bring high-performance, true-to-life cinematic video capture, along with superior photography, to flagship mobile devices”.“We introduced the first generation of Spectra back when we talked about the Snapdragon 820. And then we refined it with Snapdragon 835. But now we are introducing the second generation of image signal processing from Qualcomm. It’s called Spectra 280 and was designed from the ground-up to deliver best-in-class photography and video capture, even when the light is not ideal or there is a lot of movement in a scene,” Leland said.The executive promised the ability to take “Hollywood-quality premium video” and cameras which could break the 100 barrier in the DxOMark analysis for the first time. Snapdragon 845 supports 4K video capture at up to 60 frames per second, with 10-bit colour depth for more than 1 billion shades of colours.Adreno 630 is “designed to deliver innovations for new XR [extended reality] experiences that span virtual, augmented and mixed reality”. It is said to be the first mobile platform to enable room-scale six-degrees of freedom with simultaneous localisation and mapping for features including wall-collision detection.Also new is Adreno Foveation, which uses eye tracking to detect where a user is looking and deliver the highest quality imaging to that point. This is said to reduce power consumption, improve visual quality and boost XR application performance.AIWith AI being a hot topic among device makers and silicon vendors, Qualcomm was quick to talk up its credentials in the space. 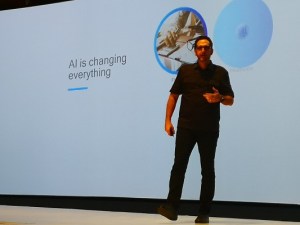 Gary Brotman, director of product management at Qualcomm (pictured, right), said: “Some of you may not realise this, but Snapdragon 845 is our third-generation mobile AI platform. We’ve been doing this for three years on a commercial level, pulling technology out of research and applying it to mobile platforms.”“We started with Snapdragon 820, applying deep neural networks for inference workloads on the device, running on the CPU and GPU, with the GPU giving great acceleration. With Snapdragon 835 we extended that to the DSP to be fully heterogeneous in the execution of neural networks on mobile devices. And we also introduced software and support for frameworks and networks to make that experience for developers easy, and for consumers compelling,” he continued.Snapdragon 845 is said to deliver a three-times improvement in overall AI performance compared with the prior generation: “We’ve made platform-wide optimisations to our compute cores and at the system level to make on-device AI more efficient from a power standpoint…We’ve built up a growing ecosystem of ISVs [independent software vendors] and partners to help our customers get to market more quickly with compelling user experiences,” Brotman said.With some rivals talking about the use of dedicated processing power for AI applications, Qualcomm was keen to defend its choice not to go down this route.“There is certainly a lot of buzz about hardware acceleration for deep learning. Down the road there may be a need for that. Dedicated hardware requires a very deliberate choice and if you don’t make that choice correctly, you’ve wasted silicon. So at this phase of the market, having a programmable vector processor like the DSP, we believe that is the right solution,” Brotman said.“If you look at some of the architectures out there today, most of those claiming to have dedicated acceleration are derivatives of the DSP or derivatives of the GPU. So you can brand it any way you wish, but we still solve the same problem,” he continued.Travis Lanier, senior director of product management at Qualcomm, added: “Maybe we should have given it a sexy name. But the important thing is that we’ve already been doing this for two years.”SecureWith Snapdragon 845, Qualcomm is introducing a hardware-isolated subsystem called the secure processing unit, which it explained in a statement is “designed to add vault-like characteristics” to existing security architectures.As a separate part of the platform, it is designed to house critical security information such as biometric data used for authentication along with user or application data key management used to encrypt critical information. 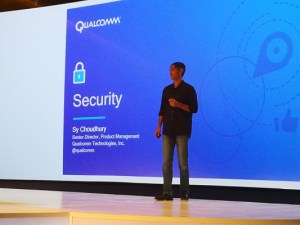 Sy Choudhury, senior director of product management at Qualcomm (pictured, left), said in future the secure vault could be used to house payment information or even to replace the SIM card: “Because we have vault-like security, we are now able to consider integrating things that were typically different, discrete parts on that electronics board,” he said.ConnectSnapdragon 845 integrates Qualcomm’s previously-announced Snapdragon X20 modem into the system, the key selling point of which is it enables a greater range of operators to offer gigabit LTE services, using carrier aggregation and 4×4 MIMO across licensed and unlicensed spectrum. 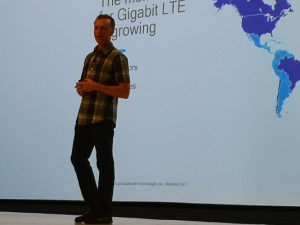 Peter Carson, senior director of product market at Qualcomm (pictured, right), explained: “You have a number of different combinations that allow up to 90 per cent of the world’s LTE operators to get to gigabit speeds. And how we’ve done that is by expanding the number of configurations for licensed and unlicensed – with four carriers of unlicensed, you only need 10MHz of licensed spectrum to get to gigabit speeds: that’s what opens up the possibilities,”Snapdragon X20 also includes dual-SIM and dual-VoLTE compatibility.Qualcomm added Snapdragon 845 offers “more robust Wi-Fi” performance using 802.11ad and 802.11ac 2×2 support with MU-MIMO. The latest Wi-Fi standard, 802.11ax, was not ready in time for integration into the Snapdragon 845 package.Perform 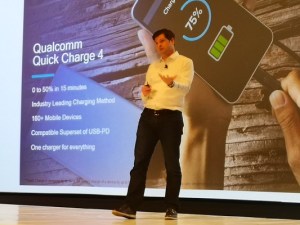 Lanier (pictured, right) said Qualcomm is “laser focused” on battery life. New camera and visual processing architectures will deliver up to 30 per cent power reductions for video capture, games and XR applications compared with the previous generation.A new architecture, Kyro 385, based on an ARM core, uses a processor with four 2.8GHz cores, offering a 25 per cent to 30 per cent performance boost over the previous generation, and four 1.8GHz cores, which offer a 15 per cent uplift. Steve Costello Steve works across all of Mobile World Live’s channels and played a lead role in the launch and ongoing success of our apps and devices services. He has been a journalist…More Read more Mobile Mix: AI, Android and open RAN